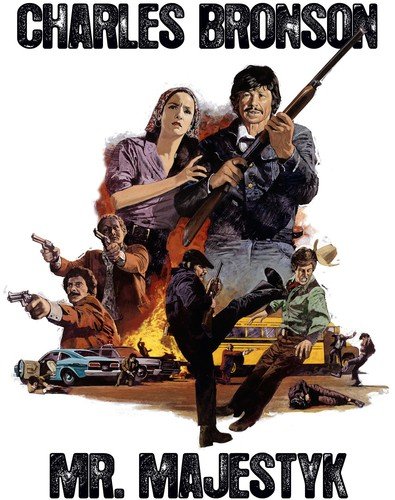 Cinema''''''''''''''''''''''''''''''''s most rugged tough guy, Charles Bronson (Breakheart Pass), threads his uncompromising coolness through a tight weave of car chases, shootouts and bare-knuckle brawling in this gritty, forceful action film (L.A. Herald Examiner)! Bronson stars as Majestyk, an ex-con and Vietnam vet whose efforts to run a farm are thwarted by narrow-minded locals and corrupt cops. But when a Mafia hitman (Al Lettieri, The Getaway) destroys Majestyk''''''''''''''''''''''''''''''''s crop, the farmer''''''''''''''''''''''''''''''''s fuse is finally blown. With his rifle in hand and his girlfriend (Linda Cristal) at the wheel, he goes after the syndicate assassin. And from high-speed back-road chases to an explosive backwoods confrontation between mobster and maverick as they stalk each other: two-of-a-kind antagonists to the death. Directed by legendary director Richard Fleischer (Compulsion) and written by the great Elmore Leonard (Out of Sight). The wonderful supporting cast includes Linda Cristal, Lee Purcell, Paul Koslo and Taylor Lacher.